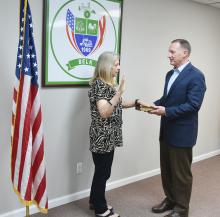 Karen Strickland made history on Tuesday, May 10 by becoming the first female mayor of a municipality in Fayette County.

With the primary elections approaching fast, several races, are expected to bring voters to the polls in near-record numbers for a non-presidential election year. In Fayette County, the races for Sheriff and Superintendent of Education each have several viable candidates who have campaigned hard for their respective positions. There are also contested Commissioner seats and Board of Education positions on the ballots in certain districts within the county. 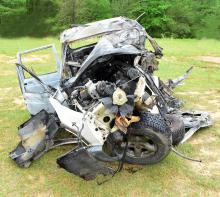 Shown is the 2001 Jeep Cherokee involved in the accident.

A single vehicle accident, that occurred at approximately 7:45 a.m. on Wednesday, April 20 in Fayette County on Highway 107 near the four-mile marker, claimed the life of the driver of a 2001 Jeep Cherokee. The vehicle left the roadway and struck a tree before catching on fire. After initially releasing an identity based on the vehicle’s identification, the Alabama State Troopers now say a positive identification of the deceased is pending the result of forensic tests. Fayette County Coroner Tim Kimbrell said the driver of the vehicle apparently died upon impact.

Commissioner John Underwood, who recently retired from the Fayette Police Department, was presented a plaque by Sheriff Byron Yerby in recognition of him beginning his law enforcement career at the Fayette County Sheriff’s Department.

The Fayette County Commission held its regularly scheduled meeting on Monday, March 28 at the Bankston Volunteer Fire Department. All commissioners were present for the meeting.

According to Fayette County Coroner Tim Kimbrell, two separate but similar accidents claimed the lives of two Fayette County men this month. Kimbrell reported that James Johnson, age 84, of the Eldridge Community in Fayette County, died on Saturday, March 12 when his pickup truck jumped into gear after he had exited the vehicle and ran over him.

Shown are the Logans as they appear today, happily married after more than 67 years together.

Strange circumstances occurred the first time Ben Logan met his future wife, Loretta Logan, during the early 1950s. He was attending a birthday party accompanied by Loretta’s aunt when he spotted someone that he had never met before. That first casual meeting led to a love story that has stood the test of time for more than 67 years.

The Alabama Cooperative Extension System is proud to announce the launch of “Move Alabama,” a collaboration between SNAP-Ed and EFNEP at Auburn University. Beginning on March 1, from 8 a.m. - 4:30 p.m., participant logs can be picked up from the Fayette County Extension office, located at 650 McConnell Loop. Logs must be returned to the extension office by April 30. Those who have completed at least 15 of the 20 challenges will be entered into a drawing for a variety of prizes.

Grayson Sullivan of Hubbertville is pictured making contact with the ball.

Lots of rain forced the postponement or cancellation of several games for local high school baseball and softball teams last week. The Berry Invitational Softball Tournament was cancelled last week, with the Lady Wildcats participating in the Lynn Invitational Tournament.

This home in Fayette County was destroyed by fire on Friday, Feb. 18.

A fire on Friday, Feb. 18 completely destroyed the home of Brandon and Jocelyn Stocks.
A call was received at the Fayette Fire Department to dispatch trucks to the home on County Road 38 West at approximately 3:19 p.m., according to Fayette Fire Chief Shannon Taylor.