An email alleging a bomb threat to the Fayette County School System on Monday, Nov. 30 has caused a complete shutdown of the school system pending further investigation of the incident. Fayette County Superintendent of Education Jim Burkhalter issued the following statement on Tuesday, Dec. 1. “I received an email Monday morning concerning a threat to the schools. After consultation with the Fayette County Sheriff’s Department and the District Attorney’s office, we decided to dismiss the schools. The buses were back and ready to transport the students home at 10 a.m.

At the start of the season, no one was sure that football would even happen, much less make it to the playoffs. But after 15 weeks of play, the two best teams in the North, the Berry Wildcats and the Pickens County Tornadoes, faced-off in the semifinals. The two teams had already faced-off in the regular season in a close game won by the Wildcats. This game would prove to be just as close, with the teams going back and forth and fighting to the end. Unfortunately for the Berry faithful, this time the Wildcats would come up a little short, with the Tornadoes taking the win 24-18.

The Fayette City Council approved board appointments during its November 24 meeting. Councilman Eddy Campbell was absent from the meeting, with all other council members present. At the beginning of the meeting, Wade Jackson, a fifth grade student at Fayette Middle School, led those in attendance in prayer. Eady Porter, a fourth grade student at Fayette Elementary School, led the audience in the Pledge of Allegiance. Prior to the board appointments, Mayor Rod Northam addressed the ongoing COVID-19 pandemic and its current impact on Fayette County.

Hubbertville’s Kylee Dunn (15) is shown breaking away for a layup.

The Hubbertville girls basketball team opened the 2020-21 season on Monday, Nov. 23 with a 53-40 home win over the Brilliant Lady Tigers. Brilliant led by three points at the close of the first quarter, but the Lady Lions held a four point lead at halftime and pulled away in the second half to secure the win. Laikyn Wright led Hubbertville in scoring with 17 points and tied for the lead in rebounds with seven. Kaylee Dunn scored 13 points and also had seven rebounds. 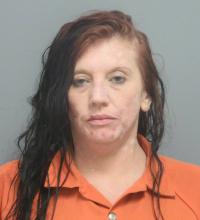 A Fayette County woman is facing charges of first-degree assault and attempted murder in relation to an incident that was reported Friday, Nov. 13. Mary Jennifer Edwards is accused of stabbing another woman while at a location on Fayette County Road 49. The victim was hospitalized with multiple injuries from being struck in the head with a deadly weapon or dangerous instrument on Nov. 12. 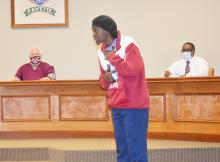 Ericka Hollis is shown making an impassioned plea to the Zoning Board. Pictured in the background are Board Chairman Bruce Perry (left) and Zoning Board member Scott Walker.

The Fayette Zoning Board of Adjustments failed to overturn a building permit decision made by Fayette Building Inspection Officer Shannon Taylor that will allow a manufactured home to be permanently affixed in a R-2 neighborhood during the board’s Nov. 19 meeting. The Zoning Board of Adjustments consists of five members: Bruce Perry (chairman), Larry Pinkerton, Scott Walker, Bobby Avant and Michael Newman. 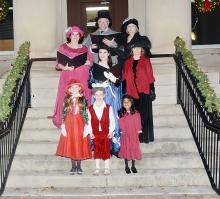 Shown are some of the carolers who are participating in the City of Fayette’s “An Old Fashioned Christmas” on Thursday, Dec. 3. From left, bottom: Ella Grace Thompson, Noah Thompson and Analise Thompson. Middle: Anna Katherine Thompson and Myra Nichols. Back: Molly Champion, Blake Thompson and Sherry Settle.

This year, a group of local citizens are organizing “An Old Fashioned Christmas” in Fayette to help brighten up the holidays during the midst of a nearly year-long COVID-19 pandemic.
Myra Nichols said that she and her husband Ned were talking to John and Karen Gordon a few years ago about possibly starting a downtown tradition in Fayette at Christmastime, especially since the ceasing of the annual “The Gospel According to Scrooge” productions that were so popular for so many years.

The Fayette County Board of Education held its annual organizational meeting on Nov. 10. Board member Keith Madison was absent with all other board members present. Prior to the beginning of the meeting, newly-elected board members Brenda Webb of District 4 and Julie Stough of District 5 were given the oath of office by Fayette County Probate Judge Mike Freeman. This was their first meeting to participate in as board members.

The Lions traveled to Pickens County on Friday night, closing out the 2020 season with a loss at the hands of the Tornadoes. Pickens County won the coin toss and following Taylor Hubbert’s kick, the Tornadoes started from its 42-yard line. The Lions’ defense stood strong, holding the Tornadoes on the opening possession with stops in the backfield by Grayson Sullivan, Alex Barnes, and Colby Tidwell. Facing fourth down and 12, Xerrance Washington’s punt rolled out of bounds at the Lions’ 43-yard line. 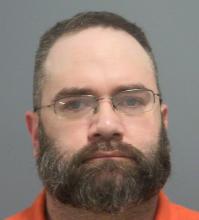 The 24th Judicial Circuit’s District Attorney Andy Hamlin announced on Wednesday, Nov. 11 the guilty plea and 20-year sentence of a defendant who shot a woman in the head during a drug transaction. Brandon Keyth Graham, 40, pled guilty last week to first-degree assault. The victim, 47, was driving a vehicle on Kelly Loop near Fayette County Road 91 with Graham as a passenger on Dec. 6, 2017.

The Fayette City Council held its first full meeting as a new council on Tuesday, Nov. 10 at Fayette City Hall. All members were present for the meeting. The meeting was opened with a prayer from guest Sean White. Will Ayers led the attendees in the Pledge of Allegiance to the U.S. Flag. Councilman Eddy Campbell made a motion, that was seconded by Councilman Jerry Nichols, to reappoint Dawn Clapp as Fayette City Clerk. The motion was approved unanimously. 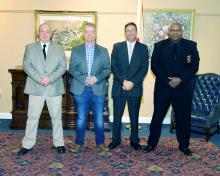 Pictured are the Fayette County Commissioners who took the oath of office for a new term prior to the commission’s Nov. 12 meeting. From left: Councilman Wesley Jacobs, Councilman Robert Townley, Councilman Shane Hughes and Councilman John Underwood. Jacobs and Townley are newly elected to the commission, while Hughes is beginning his second term and Underwood is starting his sixth term in office.

Julie Stough and Brenda Webb took their oaths of office prior to the Nov. 10 Fayette County Board of Education meeting. Stough is the new member from District 5 and Webb is representing District 4. Details of the Nov. 10 meeting will be presented in next week’s The Times-Record.

The Belk Town Council held its first monthly meeting following this year’s qualifying and election cycle. All members of the council were present for the Nov. 10 meeting. The council members officially took their respective oaths of office on Nov. 2. The members of the council are as follows: Sherry Spack, Place 1; Bill Davis, Place 2; Karen Strickland, Place 3; and Jeannie Hollingsworth, Place 4. Mike Ellison is the mayor of Belk.