The Berry Town Council approved a “Memorandum of Understanding” with Community Service Programs of Alabama during its May 3 meeting. All council members were present for the meeting. According to Berry Mayor Jimmy Madison, there are some funds available through Community Services Programs to help people in financial need with their water bills. For the town’s water customers to be able to use the program for assistance, the town had to pass a Memorandum of Understanding. 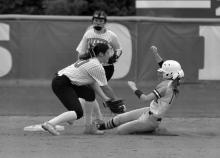 Fayette’s 2021 softball season came to a close last week as Hamilton defeated Fayette twice in the Class 4A, Area 12 Tournament. Fayette had trouble in the field during the first game against Hamilton as the Lady Aggies won 12-2. The Lady Tigers out-hit Hamilton 7-2 in the game, with Searaley Nichols and Tyy Smith each collecting multiple hits.

Berry struggled for hits early in its first area tournament game against South Lamar, losing by a final score of 5-3. The Lady Wildcats had not managed a hit entering its half of the seventh inning. Ashlyn Smith led off the inning with a single, followed by a bunt single by Brooke Hill. Allie Taylor had a single, then Caitlyn Banks followed with a RBI single, scoring Smith.
With one out, Gracyn Hydrick singled to center field to score Hill. Anna Kate VanDee then hit into a fielder’s choice, scoring Allie Taylor with the third run of the inning.

The Hubbertville Lady Lions won one of three games in the area 12 tournament to close its 2021 softball season. Hubbertville lost a heartbreaker to Meek to begin the tournament by a score of 11-10. Emma Nichols started at pitcher for the Lady Lions, and was relieved by Dixie Moye, who suffered the loss. Laikyn Wright had a double, while Moye had a hit, scored two runs and had a RBI. Kaydance Brown and Krissa Comer each had hits and scored a run. 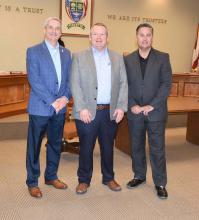 Pictured from left is Fayette Mayor Rod Northam; Tom Wisemiller, President and CEO of the Northwest Alabama Economic Development Alliance (C3); and Mark Brown, chairman of the C3 economic board.

The Fayette City Council approved a rubbish pickup contract with Harmony Lane Apartments (formerly Quail Run Apartments) during its April 27 council meeting. All council members were present for the meeting. Prior to the meeting, Scott Smyth, pastor of Vision Church in Fayette, led those in attendance in prayer. Mayor Rod Northam led the Pledge of Allegiance. Northam explained to the council that the apartments no longer use the City of Fayette for its household garbage collection service.

Pictured are the participants in Fayette's Clean-Up Day.

The Saturday, May 1 clean-up day in Fayette was declared a huge success by Fayette Mayor Rod Northam, after a truck load of garbage was removed from the streets within a 2 1/2-hour timeframe. “I’m thrilled with the results,” Northam said. “We had great support for the clean-up and the amount of garbage removed from our streets speaks for itself.”

A ribbon-cutting for a storefront veterans clinic, located inside the Medical Office Building in Fayette, was held on April 29. Pictured are several of the staff members who will be working at the facility, along with U.S. Congressman Robert Aderholt, Fayette Mayor Rod Northam, local veteran Jerry Fulmer, FMC Administrator Donald Jones and Tuscaloosa VA Medical Center Director John Merkle.

After years of having to travel to Tuscaloosa for medical services or use a mobile unit in Fayette, local veterans now have a more conventional and comfortable facility to receive medical help with the opening of a storefront Veterans Medical Clinic in Fayette. A ribbon-cutting ceremony was held on Thursday, April 29 for the new clinic, which is located in the DCH Medical Office Building on Temple Avenue North in Fayette. The ceremony was attended by local clinic staff members, local officials, VA, DCH and FMC administrative officials, several local veterans and U.S.

Governor Kay Ivey announced on Monday, May 3 that Alabama’s COVID-19 public health order will end Monday, May 31, and the state of emergency will end Tuesday, July 6. “For over a year now, Alabamians, like people around the globe, have made sacrifices and adjusted to a temporary ‘new normal.’ We have learned much since last year, and this is absolutely now a managed pandemic. Our infection rates and hospitalizations are in better shape, and over 1.5 million Alabamians have had at least one shot of the COVID-19 vaccine,” Governor Ivey said.

Berry catcher Will Knight is shown tagging a Brantley runner out at the plate.

The Berry Wildcats baseball team fell behind early and could never recover as they lost the first game of the second-round playoffs to Brantley by the score of 12-1. Brantley scored five runs in the first two innings to force the Wildcats to play catch-up the remainder of the game. Berry managed only four hits and one run in the seven-inning game, while timely hitting by the Bulldogs allowed Brantley to score 12 runs on 10 hits. 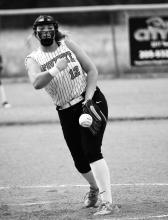 Fayette softball won three of its four games during the past week. The Lady Tigers started the week with a 13-6 victory over Hubbertville. Sarah Moore was the winning pitcher for Fayette, allowing three earned runs in seven innings with four strikeouts. Jessica Duck started the game off in grand fashion, hitting the first pitch to the Lady Tigers over the fence for a solo home run.

The Berry Lady Wildcats defeated Aliceville 18-2 in three innings during the only game played by Berry last week. Allie Taylor started the game for Berry and collected the win, allowing no hits and no earned runs in 2 2/3 innings of work. Kyla Edmonson pitched to one batter, striking out the only person she faced.

Savanna McGraw is shown getting a hit for Hubbertville.

Hubbertville played two softball games last week, losing to Fayette and defeating Phillips later in the week. On April 26, Hubbertville traveled to Fayette and lost to the Lady Tigers by a score of 13-6. Emma Nichols started the game on the mound for Hubbertville, but was relieved in the sixth inning by Dixie Moye. Moye suffered the defeat in relief. 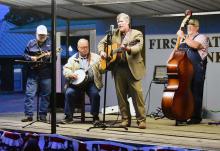 Shown is the Jeff Long Band. Pictured from left: Jimmy Joe Holsonback on the mandolin, Randy Glasgow on the banjo, Jeff Long on the guitar, and Greg Turner on the bass guitar.

The Berry Heritage Festival was a huge success, with a large crowd attending on Friday night, before the rains dampened the event a bit on Saturday. The Heritage Festival was the first big “post COVID-19 pandemic” event held in the Fayette County area. Berry Mayor Jimmy Madison said that everyone appeared to have a good time at the event. He said that hopefully, the event will be the start of a “return to normalcy,” not only in Fayette County, but also in the United States and the rest of the world.

Shown are some of the participants in Fayette’s 2019 Clean-up Day with the garbage that was collected during the event.

The City of Fayette’s cleanup day that was postponed last Saturday because of rain has been rescheduled for this Saturday, May 1. The clean-up is a project of Alabama’s PALS (People Against a Littered State). The Town of Glen Allen also had a clean-up scheduled for last Saturday that was postponed. Glen Allen Mayor Allen Dunavant said a decision would be made at the town’s May council meeting concerning the rescheduling of its clean-up event.

Shown are the members of the Fayette County Board of Education at the board’s April 20 meeting. Pictured from left: Board President Tom Hubbert and board members Keith Madison, Julie Stough, John Stowe, John Aaron and Brenda Webb.

The Fayette County Board of Education voted at its April 20 meeting to join the nationwide e-cigarette litigation. All board members were present for the meeting. The board voted to join the litigation after recessing the meeting for approximately an hour to discuss a matter concerning undisclosed litigation.

The Fayette County Commission considered a proposal from the Association of County Commissions of Alabama (ACCA) during its April 12 meeting. All of the commissioners and Commission Chairman Mike Freeman were present for the meeting. According to information received by the commission from the ACCA, Fayette County could receive $3,161,673 over the next four years under the 2021 “American Rescue Plan Act.” The ACCA proposes to provide necessary assistance to make sure that proposed projects would be compliant with federal guidelines.

Isaiah Kizzire is shown pitching a complete game for Berry in its game one win over Verbena.

The Berry Wildcats hosted Verbena in the first round of the Alabama High School Athletic Association’s baseball playoffs, winning both of the Friday games to advance into the next round. Berry had to fight and claw for the win in the first game of the doubleheader, coming from behind to win 9-6. Verbena scored two runs in the top of the first inning as they sent seven batters to the plate. The Wildcats fought back with a run of its own in the home-half of the inning.

The Fayette Tigers traveled to Oneonta for the first round of the Alabama High School Athletic Association playoffs and lost two games on Friday to finish its season. The Tigers gave a gallant effort in the first game, losing to the host team by a score of 5-4. The Tigers led 4-3 entering the bottom of the sixth inning before Oneonta’s Brodie Devaney singled in two runs to give his team the winning runs.