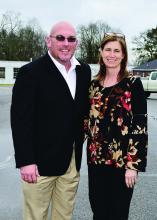 Coach Bill Smith is shown with his wife Ann Smith shortly after he accepted the head football coaching position in March 2019.

Bill Smith, who was hired in March 2019 to be the head football coach at Fayette County High School, will not be returning to coach the team this fall. Smith, who completed a respectable 8-3 season that included a first-round playoff game, was informed of the decision by FCHS Principal Dr. Jeremy Madden. Madden did not elaborate on the change of coaches, except for the following statement: “We appreciate his work and all he did for Fayette County football. He worked to mold his team into better young men.” 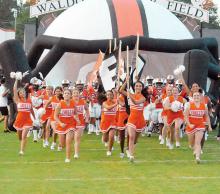 Football returned to the county schools in August, with the Fayette Tigers under the direction of new head coach Bill Smith.

We continue our review of stories from 2019 with headlines from July - December. Events from the first six months of the year were reviewed in last week’s edition of The Times-Record. July:
The Town of Berry received a clear audit report from Kellum, Wilson and Associates during its July 1 meeting. A two-vehicle accident in Fayette on July 2 caused multiple injuries and totaled both vehicles.

The Alabama High School Athletic Association (AHSAA) recently announced the new classifications and realignments for the 2020-22 seasons. Fayette remained in Class 4A, Region 5 in football. The Tigers will continue to be in the northern-half of the 4A bracket for the next two seasons, and Fayette will also continue to play Curry, Northside, Oak Grove and Haleyville as regional opponents. Also playing in Class 4A, Region 5 will be Gordo, moving up from Class 3A; and Hamilton, moving down from Class 5A. The Alabama Sportswriters Association selected Johnathan Locke of Berry as its second team All-State athlete in Class 1A football for the 2019 season. Locke, a junior on the Berry High School football team, was one of the leaders for the Wildcats. He played running back and wide receiver on offense, and also contributed heavily on defense as a defensive back.

Fayette resident Neil McCabe was recently honored by his former college for doing something that only he can say that he accomplished - scoring the first touchdown for Itawamba College in the history of the program. McCabe signed with the junior college (now community college) after playing high school football for Lauderdale County. He was a starting tailback for the first football team that Itawamba fielded in 1949, 70 years ago.

Sometimes a football game is more than just a game - it is an event that reaches beyond what takes place on the field. Saturday’s Alabama - LSU football game was one of those special events. The past several seasons, this football rivalry has become one of the most competitive in college football. 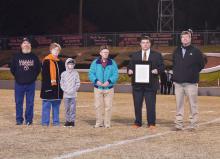 Jason Robinson (2) picks up a big first down before being pushed out-of-bounds by an Anniston defender.

Anniston used a massive rushing attack to control the game’s tempo and defeat the Fayette Tigers 19-6 in a first-round state football playoff game. The Bulldogs outrushed the Tigers 241 net yards to 24, thus controlling the time of possession to earn the victory. Zach Tidwell (73) blocks two players for Gage Alexander (10) who scores a touchdown for the Lions.

Advancing into the first round of the playoffs for the 10th consecutive year, the Lions traveled to northeast Alabama on Friday night to meet up with the Panthers of Spring Garden. Spring Garden, the top seed in region five, entered the contest with a 9-1 record and the Lions, with a 6-4 record, was seeded as the number four team from region six.