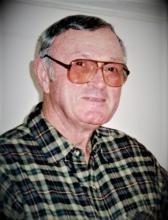 James Noel Bynum was born in Fayette County on Nov. 16, 1929. He served in the United States Army and served in Germany as a mechanic and driver. He married Martha Clearman and they had two children, Karen and Jimmy. He started Bynum Tractor Sales in the 1950s that later evolved into Bynum Outdoor Power Equipment. Every year he planted a big garden to share with family and friends, even this year he drove his tractor and hoed in the garden. He loved birds, especially hummingbirds and crows. He loved good food and did not mind sharing his opinion when it did not meet his expectations.