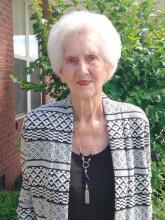 Christene was born on May 28, 1926 in the Bazemore community to White and Exie Howell where she was raised and grew up. Mrs. Hollingsworth was a member of the White’s Chapel Church of Christ. She was a graduate and Valedictorian of Winfield High School Class of 1944, and a team member of the WCHS girls’ basketball team.

Mrs. Hollingsworth was well known throughout the area as a Home Interior Displayer and made many friends and acquaintances in her career. Christene served the Fayette County School system as a bus driver for 32 years. She was actively involved in her children’s education at Hubbertville Schools, and served in various offices for the school and many community organizations. Mrs. Hollingsworth enjoyed traveling, spending time with her family, and always looked forward to cooking for family gatherings.