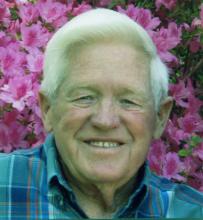 Funeral services for Mr. Wayne Douglas Edwards, age 81, of Fayette, were held Saturday, Dec. 7, 2019 at Norwood-Wyatt Chapel Funeral Home with Pastor Joel Daniel officiating. Burial followed at Wesley Chapel United Methodist Church Cemetery. Mr. Edwards died Wednesday, Dec. 4 at home.
Mr. Edwards was preceded in death by his parents, Felix and Wilma Edwards; brothers, Kenneth Edwards and Joe Edwards.
Wayne was a longtime faithful Christian and member of Wesley Chapel United Methodist Church and loved all his church family. He was employed at Fayette Grain and Feed for many years and then was manager of Fayette Farmers Co-op for twenty years. Wayne was a “people person” and always enjoyed talking with people and helping them any way he could. He met everyone with a smile and had a happy disposition. Wayne retired in 2000 and spent his later years working on his cattle farm and attending events involving his grandchildren and great grandchildren, whom he loved dearly.
Wayne and Linda loved to travel and spent many happy hours on road trips to see natural wonders of our country. They enjoyed hiking in our National Parks, especially to waterfalls. After Wayne became disabled, they began a quest of finding and photographing covered bridges and had some amazing adventures, amassing a total of four hundred twenty-six covered bridges in many different states. Wayne’s greatest love was his family and he was happiest when he was in the midst of all of them. He was a wonderful husband, Daddy, and Granddaddy, who left a great legacy to all his family and many friends.
He is survived by his wife, Linda Graves Edwards of Fayette; daughter, Lana Edwards Bynum (Daren) of Fayette; son, David Edwards (Jeananne) of Fayette; grandchildren, Emily Edwards Williams (Thomas), Matthew Edwards, Audra Bynum Spanfellner (Joe), Seth Bynum (Kirstin), and Eric Bynum (Kathryn); and great grandchildren, Charlie Bush, Caroline Spanfellner, and Clayton Spanfellner. Pallbearers were Matthew Edwards, Seth Bynum, Eric Bynum, Joe Spanfellner, Ricky Hayes, Randy Hayes, Casey Hayes, and Keith Cannon.
Honorary pallbearers were Wesley Chapel United Methodist Church members, and employees of Alabama Hospice Care.
In lieu of flowers, donations may be made to Wesley Chapel United Methodist Church Cemetery Fund or Alabama Hospice Care.
Norwood-Wyatt Chapel of Fayette directed.