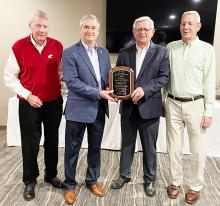 Pictured are a few of the many decorations that were displayed during the Christmas season at the Wilson home.

The Fayette City Council voted at its Dec. 28 meeting to contract with Porter-Higginbotham Engineering in a preliminary step geared toward eventually replacing both the Guthrie Smith Park and the Highway 159 pumping stations. Councilwoman Aliska Hughes-Monroe was absent from the meeting, with all other council members present. Prior to the beginning of the meeting, local resident Kelcey Hale led the council in prayer and the Pledge of Allegiance.

Editor’s note: This week we continue our annual “Year-in-Review” with headlines and stories from July - December 2021. Dr. Harold Eugene Breitling Jr., a long-time Fayette physician and team doctor for Fayette County High School athletics, passed away on Tuesday, Dec. 21 at the age of 90. Dr. Breitling was born on Feb. 10, 1931 in Demopolis, and graduated from Demopolis High School. He attended Livingston University for two years before transferring to The University of Alabama to receive his undergraduate degree. He also received a medical degree from The University of Alabama in 1957. 24th Judicial Circuit District Attorney Andy Hamlin is pleased to announce the appointment of Jack Merrell Nolen III to serve as the Chief Assistant District Attorney for Fayette, Lamar and Pickens counties. “Jack’s experience in the courtroom, along with his tireless work ethic and commitment to the citizens we serve made him the perfect fit for this leadership position,” Hamlin said. 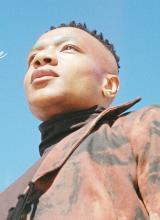 Former Fayette resident Eric Willingham has just released his debut music single and music video entitled, “Space.” Willingham, a 25-year old Fayette County High School graduate, wrote and performs the song on the video. He said that he wrote the song during a difficult period of his life.

Editor’s note: As we approach a new year, we pause to take a look back at some of the top news stories of the first six months of 2021. Our annual review will continue next week with headlines from July - December 2021. 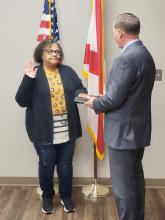 Cynthia Cowan is shown taking the oath of office from Probate Judge Mike Freeman as the newest member of the Glen Allen Town Council prior to the council’s Dec. 7 meeting.

The Glen Allen Town Council met in regular session on Tuesday, Dec. 7 at the town’s community center. Following standard opening procedures for the council meeting, Mayor Allen J. Dunavant welcomed Cynthia Cowan onboard as the newly appointed councilor to serve the town in council seat five. The Honorable Probate Judge Mike Freeman had sworn Cowan in for the position just prior to the council meeting.

The Fayette County Commission held its regularly scheduled meeting on Monday, Dec. 13. All commissioners were present for the meeting. Tom Wisemiller, President and CEO of the Northwest Alabama Economic Alliance (C3) addressed the commission at the start of the meeting. Wisemiller said that there are currently several expansions and new projects being developed in the three-county area (Fayette, Marion and Lamar counties).

The Fayette County High School Tigers will compete during the next two academic years as a Class 3A team in athletics, according to the Alabama High School Athletic Association’s reclassification of schools that was released last week. Fayette was last classified as a Class 3A school for football during the 2012-13 school years. The Tigers have been classified as Class 4A in football every year since leaving Class 5A following the 1999 season, with the exception of the previously mentioned two years. 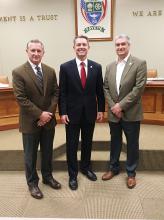 The Fayette City Council during its Dec. 14 meeting, accepted an opioid settlement from the Endo Corporation, releasing the drug manufacturer of any further liabilities owed to the plaintiffs in the case. All council members were present for the meeting. Prior to the meeting, the council heard a conference call that was played in an open work session that discussed the proposed settlement. Keith Jackson, of the law firm Jackson and Riley, explained the settlement to those in attendance.

Hollis Strawbridge (5) and Kealand Savage (15) are shown guarding a Winfield player during the Dec. 13 game.

The Fayette County High School basketball teams suffered through a tough week of games last week, including losing first round games during the WAC Tournament. Fayette’s boys completed a suspended game against Winfield on Dec. 13 and lost by the score of 68-43. Tucker Whitley led the Tigers in scoring with 18 points, followed by Kealand Savage with 10. Joey Day Chairman Chuck Langley (left) is shown accepting a check from Dal-Tile Supervisor Tim Knight on behalf of the employees of Dal-Tile.

The “Joey Day” Project was started in Fayette County in 1967, and this year will mark its 55th consecutive year of providing gifts to children in the area who might not otherwise receive presents. The project was started by the Fayette Jaycees and by Jaycee Member Harlan Prater. “Joey” was picked as the name for the program, as the name was meant to represent a typical child to be served by the project. Prater witnessed a similar program in the Boston, Mass. area, and decided the project would be a worthwhile endeavor for the club. Pictured is the apartment from which Amanda Stephens was rescued.

A tenant of a burning apartment, who jumped to safety during the fire, has been charged with first degree arson and domestic violence first degree assault after her roommate was seriously injured in the blaze before being rescued by firefighters. Ashley Brooke Hardin, 32, of 218 Carl Elliott Heights, Haleyville, formerly of Arab, was charged based on a warrant obtained by the Alabama Fire Marshal’s Office for arson first degree, noted Lt. Eddie Collins, investigator with the Haleyville Police Department.

The Town of Berry held its regular monthly meeting on Monday, Dec. 6. All council members were present for the meeting, with the exception of Councilman Troyce Townsel. The brief meeting began with Councilman Chuck Tidwell making a motion to approve the minutes of the Monday, Nov. 1 town council meeting. The motion was seconded by Councilwoman Mary Sue Lollar, and the motion was approved unanimously.

The Fayette County Tigers boys’ team hosted Caledonia High School in basketball on Dec. 6, losing by a score of 49-44. Freshman Tucker Whitley led the scoring for the Tigers with 18 points, followed by Lucas Boyd with 11. The next night, Fayette lost a heartbreaker to Northside on the road by the score of 57-56. Whitley again led the Tigers in scoring with 24 points. Landon Lowe scored 13 points, followed by Kealand Savage with 12 points. Cody Nichols is shown holding one of the trophy-size bass that he caught during a tournament.

Fayette County resident Cody Nichols says that he has been fishing for almost as long as he can remember, starting as a young boy with his dad Tommy. Those leisurely trips turned into a lifelong love for fishing, and also into a hobby that now is paying big dividends on the pro fishing circuit. Nichols, a 2010 graduate of Fayette County High School, fishes regularly on the Major League Fishing tour. He has fished on the tour for several years, but only qualified recently to fish in the top tier of tournaments on the circuit.